Cherman is a contestant and the Sole Survivor of Survivor Fan Characters 9.

Cherman was underestimated throughout Survivor Fan Characters 9, not being seen as a major threat and generally was an outsider for the majority alliances. Despite never being in a position of power throughout most of the game, his under-the-radar status allowed him to navigate to the end, thanks to the bigger threats taking each other out and Bonnie Quinn believing she would easily beat him and Tofuchao at Final Tribal Council. However he was able to secure the win thanks to a recording he made during the family visit which exposed Bonnie's horrendous misdeeds throughout the competition, allowing him to win the title of Sole Survivor in a 7-2-0 vote. 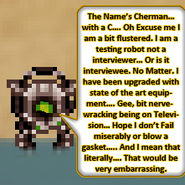 Cherman in the preview. 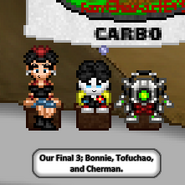 Bonnie, Tofuchao, and Cherman in the Final Three. 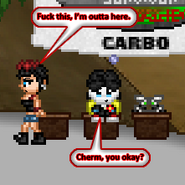 Cherman is declared Sole Survivor in a 7-2-0 vote over Bonnie and Tofuchao. 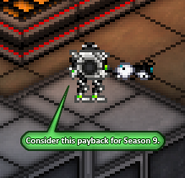