Known for being one of the most dominant tribes in Survivor Fan Characters history. Corsona would win challenge after challenge, decimating the rival Ho'Aku tribe to only two members before the merge. Despite their constant victories, there was often discourse at their camp, resulting in morale being noticeably weak.

Corsona, along with several of its members, would later return in Battle of the Tribes, but was notably less impressive in challenges, securing only three wins. Past relationships also proved to be a hindrance on the tribe.

Their tribe color is purple.

Battle of the Tribes MembersEdit 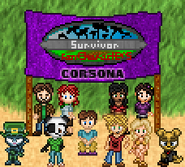 Manya voted off.
Add a photo to this gallery 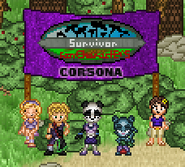 Chrii voted off.
Add a photo to this gallery

Retrieved from "https://sfccomic.fandom.com/wiki/Corsona?oldid=34149"
Community content is available under CC-BY-SA unless otherwise noted.