Drazen is a tribe from Survivor Fan Characters.

Their tribe color is green.

In Days 1-3, Drazen first went the wrong way to their camp by Hugo's lead, it seemed like he would be the tribe's first target for his mistake. But when alliances between Pat, Suzanna, and Oran, Charlie and Wendy, and Hugo and Eugene, the target wavered between all of the men. Wendy became the tribe's main food provider, as she found a pond filled with fish and caught them by hand. Drazen lost the first Immunity Challenge, Phil was kidnapped with Wendy looking to be the main target for her mess-up. However, Pat and her alliance targeted Eugene for calling Wendy a 'cyclops', and lied to Hugo and made him believe that he was targeted. This concluded in a 4-3 vote between Eugene and Pat, with Eugene being the first sent home.

Days 4-6, after the events of Tribal, Wendy was angry at Pat and her and Charlie joined Phil and Hugo in order to take out Pat's alliance. Their first plan to target was Oran, but when they lost Immunity and the kid was kidnapped, their target switched to Suzanna. Charlie and Suzanna were good friends, so Charlie offered Pat her vote to tie it up, but Pat thought it was useless, and Suzanna went home in a 6-2 votes between her and Phil.

From Days 7 to 9, Wendy, Hugo, and Phil doubt Charlie's allegiance with them after Pat told them that Charlie had voted Phil. Pat, meanwhile, decided to break off her ties with Oran but had not told him yet. That round, Drazen won immunity and had kidnapped Hogan from the Schlipa tribe.

In Days 10-12, Hogan tried to demotivate the tribe by saying that Schlipa threw the past challenge and it worked. Pat finally broke her ties from Oran publicly, and the two got into a fight which disrupted the camp. Another Immunity lost, Oran tried to turn the whole tribe against Phil, but this didn't work and Oran was voted out in an unanimous decision.

From Days 13 to 15, Wendy, Hugo, and Phil decided to swap Charlie in their alliance with Pat, since Charlie had been sucking the life out of camp. Charlie tried to get a secure spot by talking with Phil, however it was later revealed to the girls that Phil and Hugo had a secret duo among their alliance. Drazen won Immunity this round, and kidnapped Skylar from Schlipa.

In the tribe's final days of 16 to 18, Wendy wanted to join Hugo and Phil's secret alliance and be tight with them instead of the two girls, who grew close to each other. Drazen lost Immunity again, and with Wendy sent to Exile Island Pat was put into a swing vote position between Charlie and the guys' alliance. At Tribal Pat voted with Charlie, putting Charlie and Phil in a question tiebreaker, which Charlie won and led to Phil's elimination.

Right after their Tribal Council, Drazen and Schlipa both merged on Day 19. 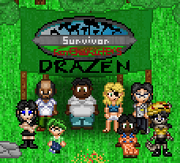 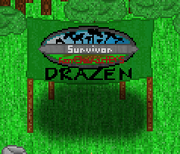 Phil eliminated.
Add a photo to this gallery

Retrieved from "https://sfccomic.fandom.com/wiki/Drazen?oldid=30779"
Community content is available under CC-BY-SA unless otherwise noted.