An ejection is a rare method of elimination in Survivor Fan Characters, that involves the removal of a contestant due to rule violations.

The first ejection occurred on Day 5 of Survivor Fan Characters: All-Stars, when Maria made an attempt to stab Vinnie Reid with her tribe's machete. The other Solaris members quickly came to his aid, and they eventually managed to subdue Maria after Kala had hurled Omay into the back of her head, rendering her unconscious. Security then arrived to take Maria away, with Jeff Probst announcing that Maria was the second person out of the game, and that Tribal Council that night would effectively be cancelled for the Luna tribe.

On Day 28 of Survivor Fan Characters 12: Fans vs. Canons, after the Immunity Challenge, Jeff announced that Maggie Greene would be receiving thirty-seven penalty votes to account for her several cases of intentional property damage, which was statistically enough to eliminate her from the game. However, Cleopatra Patterson pointed out that the idol had not been destroyed and was still in Enter's possession. It was then revealed that Maggie was really being ejected for assaulting Mike the day prior, requiring him to need stitches. Maggie then exchanged a few parting words with her fellow castaways before Jeff escorted her out.

On Day 12 of Survivor Fan Characters 16: Blood vs. Water, after the Reward Challenge, Iyzebel Wagner struck Lolita Thorne in the face. Several others attempted to subdue Iyzebel, but she overpowered all of them, including the staff's security guard, Polar Bear. After a while, Iyzebel managed to calm herself down, and without any further aggression, left the challenge area, with Jeff telling her she was the fifth the person out of the game.

On Day 3 of Survivor Fan Characters 20: Generations, at Tribal Council, Shin Kasai switched the votes intending to vote him out to votes for Clarissa. Unfortunately for him, his lie was caught when he was the only one who referred to Clara Sutherland as Clarissa, with everyone calling him out on his lie. Jeff then found an extra vote for Clarissa in the urn, thus having it as eleven votes instead of the original ten. So, even though Kasai was to be voted off first, Jeff told Kasai that he was ejected from the game due to the cheating he had done. 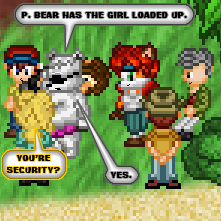 Maria is ejected due to intending to inflict harm upon Vinnie. 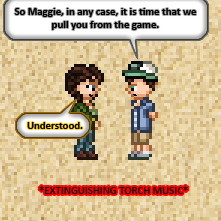 Maggie is ejected due to assaulting Mike. 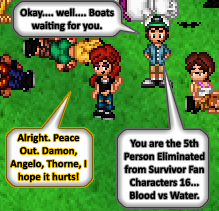 Iyzebel is ejected due to assaulting both contestants and staff. 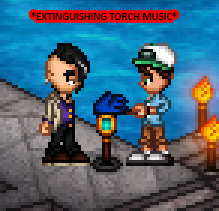 Kasai is ejected due to forgery of the votes.