Ho'Aku is a tribe from Survivor Fan Characters 7.

Ho'Aku became infamous for their extensive losing streak, only managing to win three out of the total eleven tribal challenges. Despite this, the tribe's two remaining members would go on to last deep into the merge, with one of them even winning the game.

Their tribe color is blue. 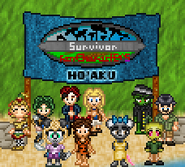 Russell voted off.
Add a photo to this gallery

Retrieved from "https://sfccomic.fandom.com/wiki/Ho%27Aku?oldid=34150"
Community content is available under CC-BY-SA unless otherwise noted.