Pambar is a tribe from Survivor Fan Characters 3.

Having the distinction of being the first tribe in Survivor Fan Characters to be dissolved before the merge, the tribe struggled at both the social and physical aspects of camp life. They had only managed to secure one out of four challenge wins before being absorbed on Day 9.

Their tribe color is pink. 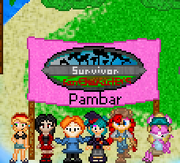 Miichelle voted off.
Add a photo to this gallery

Retrieved from "https://sfccomic.fandom.com/wiki/Pambar?oldid=34133"
Community content is available under CC-BY-SA unless otherwise noted.