While initially perceived to be a well-armed and well-coordinated military soldier, Quickscope was quickly revealed to be just an obnoxious 8-year-old who would yell and complain over tedious things on his headset. Despite this, he proved to be a valuable asset to Bulu by performing well in physical challenges. However, he was much less appreciated on Fini following a tribe swap, and was eventually voted out 3-1-1. 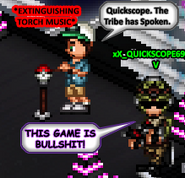 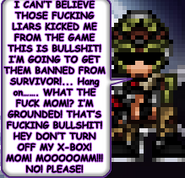