A quit is a rare method of elimination in which a contestant chooses to voluntarily leave the game without a vote taking place.

Although not technically deemed to be quits, some contestants have also chosen to leave the game by requesting that they be voted out at Tribal Council.

The first quit occurred On Day 19 of Survivor Fan Characters 2: Brains vs. Brawn. When Sue decided to quit the game because she knew she was the next to be voted out on Caruga's next immunity loss, as well as being upset at Caruga losing immunity on purpose to vote out Drake and other events.

On Day 29 of Survivor Fan Characters 9, Donovan had decided to quit the game during the Reward Challenge. Feeling confident that he would make the finals, he did not enjoy how "predictable" the game was, and thought it would be more interesting if he had left.

On Day 12 of Survivor Fan Characters 14, Adeline quit after she could not handle remaining in the game without the recently voted out John Hunter. After talking about her decision with host Jeff Probst, he announced her departure from the game to the Uwassa tribe at Tribal Council.

On Day 15 of Survivor Fan Characters 18: Past vs. Future, During Tribal Council, Deimos had decided to quit the game, feeling that his power put the other contestants at risk. He wanted to quit without a vote taking place, as he did not trust Shin Kasai to not use his idol to save him.

There are some instances where a contestant's elimination closely resembles, but is not deemed to be a quit.

On Day 16 of Survivor Fan Characters 5: The Cursed Islands, Audrey chose to accept the bribery curse in a tiebreaker against Maria, voluntarily eliminating herself from the game with a consolation prize of $28,000.

In Survivor Fan Characters: All-Stars, Vinnie Reid was stabbed by Maria on Day 5. Not wanting to be pulled from the game, he managed to hide his injuries up until Day 16 when they became too infected to ignore. He revealed the truth to his tribe and asked to be voted out, which he was 6-1.

On Day 16 of Survivor Fan Characters 10: Battle of the Tribes, Phil had asked to quit the game before the Reward Challenge after Bonnie Quinn had convinced him that he was sick. This annoyed Jeff, who declined Phil's request. Later in the season, Phil believed that he had no way of saving himself from being the next one voted out, so he told the remaining players that he would be accepting of his fate. He was later voted out 5-1.

In Survivor Fan Characters 15, Billy wanted to leave the game after Xeradonus was voted out. Most of his tribe complied with his wish, and on Day 7, he was voted out 6-2-1.

In Survivor Fan Characters 18: Past vs. Future, during the Day 10 Tribe Council, Nayla Oxenfree asked to be voted out by her tribe after revealing that she was struggling to figure out her life, and didn't believe the game would help provide the answers she was looking for. On Day 13, realizing that he was cornered, Ethan Johnson volunteered to be voted out in order to save his past counterpart, E.T. Johnson. On Day 30, Atlas was willing to go to rocks, feeling that it was his time to leave the game, and was accepting of it. He was later eliminated in the rock draw. Finally, Shin Kasai requested the jury to not vote for him at the Final Tribal Council, as he feared winning the game would lead to him becoming his future counterpart, Kasai, and that the victory itself would feel hollow.

Unlike in the real-life show it is based on, quitting is not particularly frowned upon in Survivor Fan Characters. Although, it has been shown to mildly annoy host Jeff Probst, who has even gone as far to decline a contestant's request to leave the game. 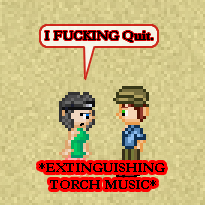 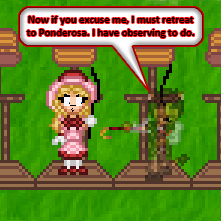 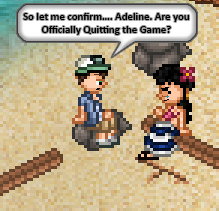 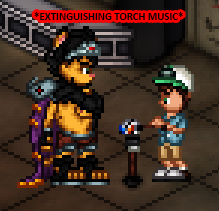