Retro was a starting tribe from Survivor Fan Characters 10: Battle of the Tribes.

Retro managed to secure 7 wins and was known for dominating the game by throwing the immunity challenges and out-smarting their rivals. Their tribe color is green. 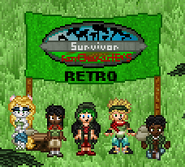 Miranda voted off.
Add a photo to this gallery

Retrieved from "https://sfccomic.fandom.com/wiki/Retro?oldid=30234"
Community content is available under CC-BY-SA unless otherwise noted.