Schlipa is a tribe from Survivor Fan Characters.

Their tribe color is blue.

In the first days of 1-3, Schlipa started off well by being able to make fire, finding a good place for shelter, and have an expert nurse in Bea, showing her skills by taking care of Craig's snake bite. On Day 2 Rene and Merideth started one of the major alliances of SFC1, and even though Craig asked to be part of it they laughed at him. Lyle had gotten his feelings hurt later on by Hogan. Schlipa did will in the first Immunity Challenge, won, and kidnapped Phil from the Drazen tribe and tried to get information from him.

In Days 4-6, Bea and Lyle explained some of the positions of their tribe everyone has to Phil, including Craig being the joke of the tribe. Taylor later formed two different alliances with Sky and Hogan, and made herself into a target by annoying everyone else on her tribe. Craig became everyone's vote that different alliances wanted, but he would only go with one if they were to vote Bea, because she was mean to him. Schlipa continued their winning streak by winning Reward and Immunity, and kidnapped Oran from Drazen.

Days 7-9, Hogan threatened Rene with throwing the challenges because he wanted to get rid of someone from their tribe. On Day 7, Skylar became sick and this gave Bea the opportunity to target him, although no one else was on board with voting the raccoon out. Later, Sky told Taylor and Hogan about Rene and Merideth wanting them out, and the three were put on the offensive and made sure that they would be safe. After Hogan was kidnapped, Skylar convinced Lyle and Bea to vote for him, and he, Craig, and Taylor all voted for Bea, and the lioness was sent home in a vote of 3-2-2.

In Days 10-12, Rene and Merideth were angry at Craig for betraying them, and Lyle found out Skylar's secretive and manipulative side to him. Later, Rene and Merideth decided that they needed a bigger, more secure alliance, and spent more time with Craig in order to get the man to stick with them. Taylor and Hogan started a romantic relationship, and accepted Skylar as a third to their alliance. Schlipa won the Immunity Challenge on Day 12, and kidnapped Hugo.

From Days 13 to 15, Rene and Merideth sparked an alliance with Hogan, Taylor, and Craig. This left Lyle and Skylar on the outs of the tribe, and even though Lyle tried to make an alliance with the raccoon Sky denied him. Sky later manipulated Craig into wanting to keep him while Lyle got the girls, Rene and Merideth, against Sky. When Lyle was sure he was going, he told the tribe about the pecking order after he left, which made Rene and Meri angry at him and caused Merideth to yell at him at Tribal, where he left in an unanimous decision.

In the tribe's final days of 16 to 18, Merideth tried to recover the tribe's trust in her and Rene after her outburst to Lyle, however no one believed her and no longer trusted the girls. Rene set her targets on Hogan while he tried to get Taylor stronger to face off against Charlie. Schlipa won reward and immunity, which was to go to a bartering village with 50$, which Skylar secreting spent on a fake gold necklace, which only Merideth knew about.

Right after Drazen's Tribal Council, Schlipa and Drazen both merged on Day 19. 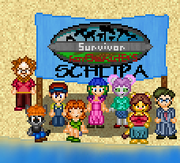 Lyle voted off.
Add a photo to this gallery

Retrieved from "https://sfccomic.fandom.com/wiki/Schlipa?oldid=34128"
Community content is available under CC-BY-SA unless otherwise noted.