Welcome to the wiki! This wiki is about SWSU-Master's webcomic, Survivor Fan Characters. Anyone is welcome to edit this. Link to his webcomic are located here: 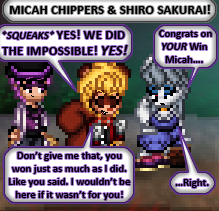 Get ready for the 20th season!

Micah and Shiro are the Sole Survivors of SFC19: Star Allies, 5-3 over Fuschia!

Vote for your favorite SFC contestants!

Survivor Fan Characters (SFC) is about sixteen to twenty contestants from different series competing for $1,000,000 for 39 days. Each contestant is a fan-created character from a video game, TV show, movie, book or any other type of media, ranging from human, anthropomorphic animals, aliens, and robotic characters. The format is essentially the same, the characters are divided into two or more tribes, then when eight to twelve characters are left, they are merged into a single tribe. There are also several twists in the series, such as tribal dissolves, tribal switches, mutinying, idols, and curses. Currently there are twenty complete seasons, with a twenty-first planned.